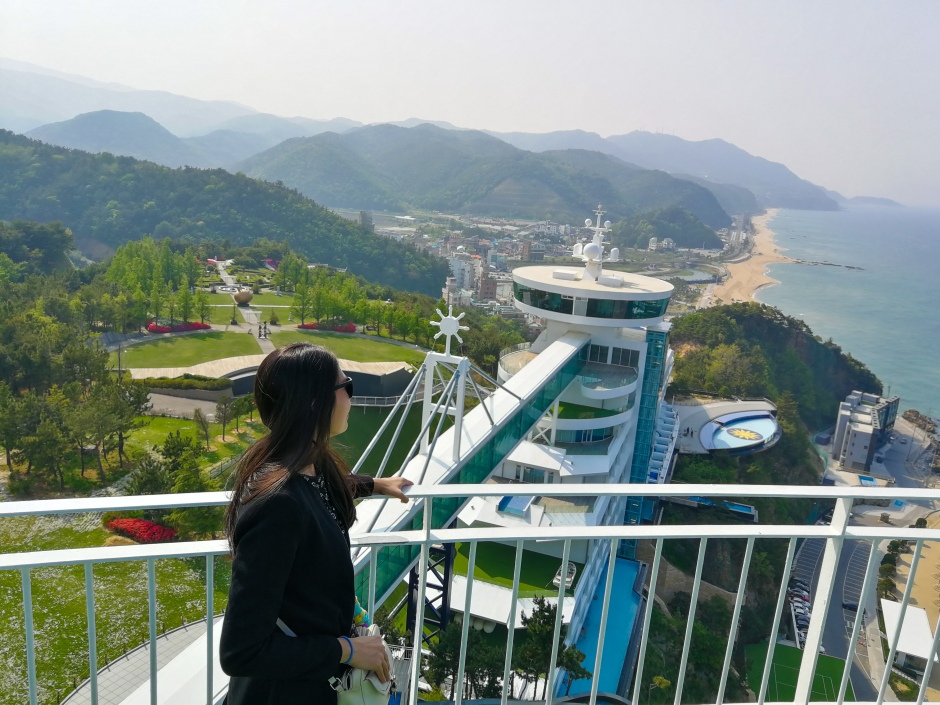 It’s been awhile since I last updated my travel blog. I had trips to Korea before the pandemic but I didn’t get the chance to share my travel experiences and the places I visited. My last trip to Korea was spring of 2019 and I stayed there for 22days. That was my longest stay in Korea so far. During my trip, I visited 10 cities from different provinces. Spring is my favorite season to travel around Korea mainly because of the warm weather that makes it easier to travel from cities to cities and the blooming flowers make each place more relaxing, magical and insta-worthy.

Though it took me awhile, but I want to start sharing my trips which you may refer to if you want to visit Korea when their borders open for tourist and when it’s safe to travel again.

First stop is the city of Gangneung in Gangwon Province which is located in the northeastern part of South Korea. I have been to Gangneung in winter of 2018 to visit Jeongdongjin. It was freezing back then that’s why I wasn’t able to fully explore the place so I decided to come back.

I arrived in Incheon International Airport via Cebu Pacific from Manila around 11pm on April 2019. It was already late to go Seoul at that time so I planned to stay at the airport until the next morning to head straight to Gangneung. Although there’s an option to take the bus in Incheon International Airport to Gangneung but that I opted to wait for the first train to Seoul Station to take KTX. Back in winter 2018, I took the airport limousine bus from the airport to Sokcho. It was a bit pricey but it’s more comfortable than having many transfers. KTX is also expensive, but that was the last day of the discounted fare so I saved about 70% of the original fare plus travel time since KTX is the fastest train in Korea. I knew it before the trip because I follow pages of Korea Tourism Organization and other related pages for they constantly post events, travel news, latest updates and sometimes I can also get discount coupons that I can use for the trip.

After checking in at the hotel, first itinerary was Jumunjin. This place became well-known to foreign travelers because of the memorable scene at the breakwater in Yeongjin Beach or simply known as Jumunjin breakwater from the K-drama Goblin. Goblin was aired in 2016 but until now this place still attracts local and foreign travelers who want to take photos and recreate the scene from the K-drama.

Sodol Adeul Bawi Park or the ‘Son Rock’ was not on my itinerary. I’ve never heard about it before. It just happened that while looking for the Jumunjin breakwater, I took the wrong way and ended up discovering this hidden gem. The myth says an old couple who couldn’t have a child, managed to have a son after praying on the rocks for 100days.

If you are interested in seafood, you may also visit the Jumunjin Fish Market situated next to Jumunjin Port. I heard it is the largest seafood market on the east coast of Korea.

How to get there: Take a bus to Jumunjin Bus Terminal. From there, you can walk to the fish market and to the breakwater.

I must say, this is one of my favorite places in Gangneung.

Jeongdongjin Station is a small but picturesque station known for the being the closest station to the ocean. It’s also one of the best spots to catch the sunrise as it is facing the east sea. There is a rail bike where you can pedal your way along the beach to enjoy the scenery.

How to get there: From Gangneung Intercity / Express Bus Terminal, take Bus No. 109 and get off at Jeongdong Bus Stop. Walk for approx. 300 m.

Jeongdongjin Hour Glass is said to be the world’s largest hour glass located at the Sandglass Park just a few minutes walk away from Jeongdongjin Station.

Jeongdongjin Time Museum (정동진시간박물관) which is also located at the Sandglass Park, is comprised of a steam locomotive train that features exhibition spaces on the concept of time.

How to get there: From Gangneung Express Bus Terminal Bus Stop, take Bus No. 109 and get off at Moraesigye Park Bus Stop or from Jeongdongjin Bus Stop, walk for about 700 m toward the park.

Sun Cruises Resort and Yacht is a 4-star hotel designed in the image of cruise ship and located at the top of the large cliff. It’s been featured in CNN’s 12 Hotels You Won’t Believe Actually Exist. The hotel is open to visitors who want to take photos inside the vicinity with applicable entrance fee but it’s so worth it. You can have a 360 view of Jeongdongjin at the viewing deck of the hotel.

How to get there: You can walk from the Sandglass Park or you can take the Bus No. 109 and get off at Sculpture Park Bus Stop.

Bonus place is Raramuri which is located near Deungmyoung beach. If it looks familiar, you’ve probably seen it in K-dramas. It is a small cafe facing the beach and that has been shooting locations of popular K-dramas like Goblin, Legend of the Blue Sea. Meloholic and Encounter. I’m not sure if it still operates though.

How to get there: From Gangneung Intercity Bus Terminal Bus Stop, take Bus No. 111, 112 or 113 and get off at Haslla Art World Bus Stop. From there, you have to walk along the beach for about 5-7mins.

There are a lot more to be explored in Jeongdongjin such as Haslla Art World also known as Pinocchio Museum, Korean War Monument, Tongil Unification Park among others. When you take the bus from center of Gangneung, you have to get off at every bus stop when you approach Jeongdongjin because there’s something worth visiting. I just didn’t have enough time to see all of them so I had to skip some. If I had another chance to go to Gangneung again, I’d love to go back to Jeongdongjin.

This is another famous place in Gangneung especially for coffee lovers. Cafes are lined up along the coastline of Anmok beach. These cozy cafes have windows or terrace with the ocean view where you can enjoy your favorite coffee.

After touring around Gangneung, last stop is always Wolhwa Street to eat dinner or street foods and enjoy live music as it is a place famous for busking.

Gangneung Jungang Market is located next to Wolhwa Street. The market is divided into a traditional market and a fishery market. There are restaurants and cafes on the 2nd floor. Visiting traditional markets in every region in Korea is always a good idea to have a taste of their delicious local produce and cuisines.

How to get there: From Gangneung Intercity Bus Terminal, take Bus 202 and get off at Sinyeong Theater Bus Stop.

I stayed in Gangneung for 5days and I also got to visit nearby cities such as Donghae and Pyeongchang. Other than these cities that I mentioned, I have other dream destinations in Gangwon-do for every season so I’m looking forward to the day when I can come back to Korea.